Everything we know - and don't know, I guess - about all those Silent Hill rumours.

Yes, saw that. Shitty thing to do, esp after breaking an NDA on REAL info about Assassin's Creed.

This does not affect the leaks/info I believe, though, so nothing's changed for me!
V xx

© 2003-2022 Vixx. The contents of this post may only be used within the boundaries of silenthillforum.com. Any usage outside of the aforementioned forum is strictly prohibited. No, I can't believe this place is still up and running, either.
Top

None of the big SH leaks came from that leaker as far as I'm aware.

I wonder if Konami has in mind something more formal to announce regarding the movie so that they can put together a big SH media showing of both new games and the movie. Probably only to arrange a teaser trailer and a Q/A + casting announcements with Gans.
Top

Could be either a console game, or a mobile title, or a slot machine/arcade game... given their primary business.
http://m.uniana.com/eng/about/about.php

The title sounds like a small title, so best case scenario is that it could be Anapurna's project.

Dusk Golem also leaked this image. Something where SMS messages are tied in to the gameplay.

I recall Shattered Memories had a similar thing. Perhaps this builds on that... And seems to tie into the PT Sakura concepts.

The Short Message could be the playable teaser and ties into messaging. So they are not trying to hide the fact that the PT follow up they are doing is Silent Hill. Maybe the teaser itself contains all the announcements rather than a conference or show. To his knowledge, Sakura was openly going to be called Silent Hill, and not cryptically named like PT to be a surprise.

DuskG says he has not heard the name of this game before, but feels it is Sakura and confirms that Sakura has the SMS feature.

Some people are stating that the CC NV code is specifically used for console games... 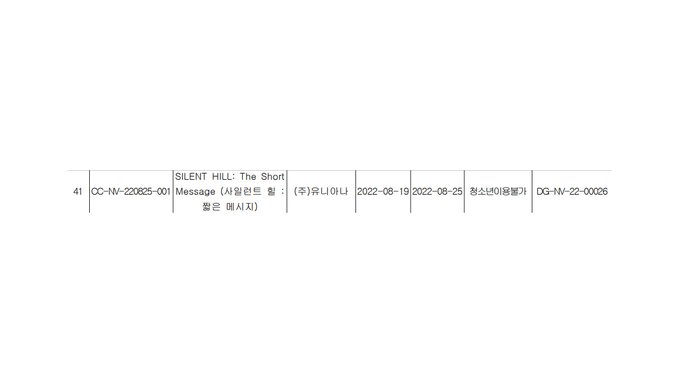 I'm guessing this will be a surprise Halloween season drop... OMG It's Happenin'!!!

Is this enough to pull the trigger on a new forum section?

I'm told it can't be a pachinko machine because they're illegal in south korea.
Top

Reviving Silent Hill after 10 years with a mobile game actually sounds like something Konami could do, though.
I EAT GALAXIES FOR BREAKFAST.
Top

It is confirmed for sure for consoles-only. 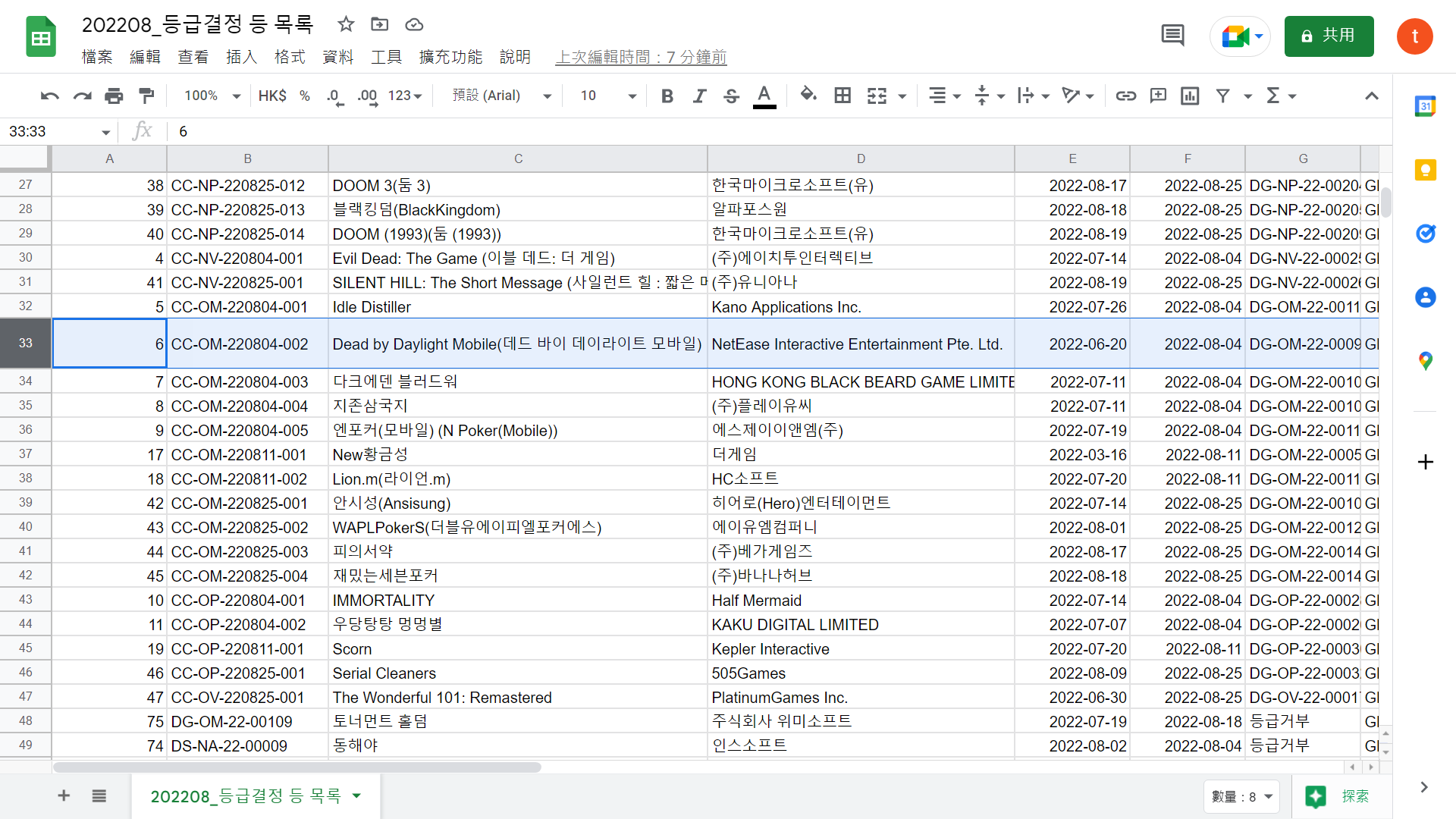 (Silent Hill: The Short Message is listed two spots below what's highlighted, this is highlighted to show the CC-OM moniker to the left, which classifies it as the Mobile Game category.)

CC-OM is the Korean classification for mobile game, CC-NP is the classification for PC game. You'll see that Silent Hill: The Short Message is classified under CC-NV, which is for Home Video Console. While no platform is specified, the rating 100% does confirm this is a video game for Home Consoles rather than Arcade, Mobile, PC or anything else.

PC still has a shot since not all PC games need to be rated in Korea, but the rating here is specifically for Home Console.

Some translations of the leaked image have some info. There are two people texting each other , one is the player, the other is named Amelie (sender) and they talk about Maya (another dead character, maybe Japanese and the cherry blossom monster?). This suggests a Western + Eastern theme. Amelia may be the foreign girl in the concept art with glasses. The player is of course, you in first person. Dialogue may therefore not be sex specific with concern to the player.


Amelie: I wonder why Maya died...
Player: You got any ideas?
Amelie: Nope.
Amelie: That's what makes this so difficult.
Amelie: I guess I didn't know much about her at all...
Amelie: Aren't your clothes gonna get dirty wandering around a ruined building like that?

"The Short Message" title does fit in well with the themes in the leaked stuff.

Not just the idea of text messaging or Twitter, but the post-it notes seen in concept art. And the fact that this could be the free PT experience, which is a short affair, but I suspect there is a puzzle aspect where an online component is required to unlock the SH5 trailer and/or other announcements.

It is probably a looping school hallway that radically transforms by cycling through foggy SH to night SH and more otherworld SH as the story progresses. Probably only one enemy which is Ito's cherry blossom girl.

There is likely some 'strand system's thing where players SMS each other, though I imagine within fixed messages like Dark Souls, and much like the internet, you can be helpful or a troll. Maybe with different outcomes that may reveal different trailers depending on your ending.

It could also be the case that for marketing timing purposes, players could be stuck until a patch is released, which would be lame, but I imagine the playable teaser can stick around for awhile and be updated for each new announcement they want to make, which could be a cool and inventive way of doing announcements. DuskG said they are doing some very cool things with this that he doesn't want to spoil, so I imagine this will be it and hence there will be no SH announcement showings at other presentations. Well... other than the PT announcement itself... I can dig it! Maybe that October Sony show is happening after all... Apparently Korean rating board pop ups tend to indicate 1-2 months release timeframe.

The only thing is that I have a feeling that this could be PS5-only... So some of us will miss out. That's even if the game is multiplatform... Doing delivery on a free thing like this seems like something Konami would try and get Sony to fit the bill for. And Sony did help with PT and are into doing things like the Radiohead experience. The Matrix one was also awesome, and multiplat from EPIC, though specifically to demonstrate Unreal, so it had to be. I like this concept of demo-debuting. Maybe it'll become a bigger thing for major projects from developers.

If it is PS5 only, Sony might also be wise to allow PS+ PS4 owners to stream it. And thinking about it now... even if the demo is console only, even PC and mobile users could get in on it if it supports streaming play... hmmm... Kojima did have that thing with Overdose...
Last edited by jdnation on 26 Sep 2022, edited 2 times in total.
Top

At the very least if it's a ratings leak that mean an announcement can't be too far off. "The Short Message" is definitely a strange title but it depends on what it is.
Top

The new movie will also begin shooting in February next year... things are moving!
https://silenthillforum.com/viewtopic.p ... 26#p697526

While I'm glad we seem to be getting some more concrete confirmation that something is actually happening soon, I do find that to be an awkward title and hope it's just the playable teaser.
"Oh yeah, I've been here before
I can see it with eyes closed
Shadows that look like blood
Dead as far as the mind goes
Fear that comes from my head
Lives in the mirror"
Top

I would be seriously shocked if they don't call the next major game "Silent Hill 5" regardless of what it is. It's the easiest way to signal that it's going to be special.
Top

This was exciting news to wake up to, regardless.
This post is the property of its author and is not to be used elsewhere without explicit permission from the author.

I'm so excited that things are finally, undeniably in motion and we should see something very soon. Games getting a rating tends to be one of the last steps before reveal and release so it has to be coming soon.

I'm just happy we finally got some more confirmation that something is happening. I'm also wondering if the name is kind of like a fun way to title the playable teaser, since it will be "shorter" than the full game. The full game could be called "Silent Hill 5: The Message" maybe?
"The truth is rarely pure and never simple" - Oscar Wilde

It's also possible 'The Short Message' could be an Asia-specific title. So the Western release could be something else... as it does sound kinda off... So they could probably go with 'The Message' or 'The Messenger' overseas.

Either way it heavily implies that this is just for the short PT-like experience.

Whether Silent Hill 5 will get the '5' or some subtitle is what will be interesting...

Kojima did have some zany messaging system ideas for Silent Hills back then though that also involved actual messages which would obviously never have been done. It would be interesting to know if Konami or whoever is using any of his old ideas. There was probably at least some stuff on paper at Konami so that he could make and pitch Silent Hills and P.T.

Anyway, I'll be intrigued to see what the final thing looks like, as all the leaked pics were from years ago, so it should definitely look much better now, especially if it's a similar linear corridor experience running on a PS5.
Top